Horizontal Hiccup has an interesting muscle recruitment pattern that targets the the spine and joint stabilizers throughout the entire body making it a fantastic total body stability and core strengthening exercise. Remember… The ‘Core’ is not just the abdominal muscles… but is a descriptor for all the musculature that stabilizes the axial skeleton.

There are six main phases of Horizontal Hiccup, each with a unique subset of muscles being recruited. The initial Weight Shift Backward phase of Horizontal Hiccup includes a concentric contraction of the hip flexors (iliopsoas), stifle flexors / hamstrings ( semimembranosus, semitendinosus, and biceps femoris), and elbow flexors (biceps and brachialis). Along with an eccentric contraction through the quadriceps femoris, sartorius, and triceps, as the body loads energy into these muscles like a spring, preparing for the Push Off Backward Phase.

During the Push Off Backward phase the energy in the coiled spring is released as the biceps and triceps work together to generate forward forces into the front foot target, propelling the body backward as a result.

The hip abductors (gluteals) and hip adductors (iliopsoas, adductor, pectineus, and gracilis) also engage to help the pelvic limbs maintain parallel / neutral alignment. If there is an imbalance through these muscles, the femur will drop inward our outward, misaligning the stifle joint. As the dog transitions to the Eccentric Sit phase, the thoracic limb is pulled backward onto the rear foot target by the deltoidious, triceps, and latissimus. At the same time the spine is being flexed by the external and internal oblique, and the pelvis is tucking under / rotating caudally via the engagement of the gluteals and 3 hamstring muscles.

Lastly, the sartorius and quadriceps femoris, in the pelvic limb, engage eccentrically to resist gravity, absorbing the forces of impact. And in the thoracic limb, the serratus ventralis, supraspinatus, biceps, and deep & superficial digital flexors do the same. This is the portion of the Horizontal Hiccup that “proves” if the core muscles were recruited in the correct sequence or not. During the Push off forward the Dorsal Chain has to engage to “hold up” the spine as the support of the front feet are removed.

The Dorsal Chain is analogous to the human Posterior Chain runs from the base of the skull, along the spine, into the pelvis, and down the back of the pelvic limbs. These muscles include… As the dog moves into the landing phase of the Horizontal Hiccup, the muscles in the TL (supraspinatus, deltoidious, biceps, brachialis and the digital flexors) engage eccentrically / isometrically to absorb and control landing forces.

At the same time the Ventral Chain, is engaging isometrically, to maintain a neutral spine and absorb impact. The Ventral Chain is analogous to the human Anterior Chain and runs from the underside of the chin, to the ribcage, along the abdominal area, to the pelvis and attach to the proximal femur. These muscles include… So as you can see the muscle recruitment pattern in the Horizontal Hiccup is quite complex! Feeling confused by some of this anatomy language? No worries! I made a Canine Anatomy: Glossary of Terms just for you!

« Back to Horizontal Hiccup: Expert+

Target these muscles in a similar way with the exercises below 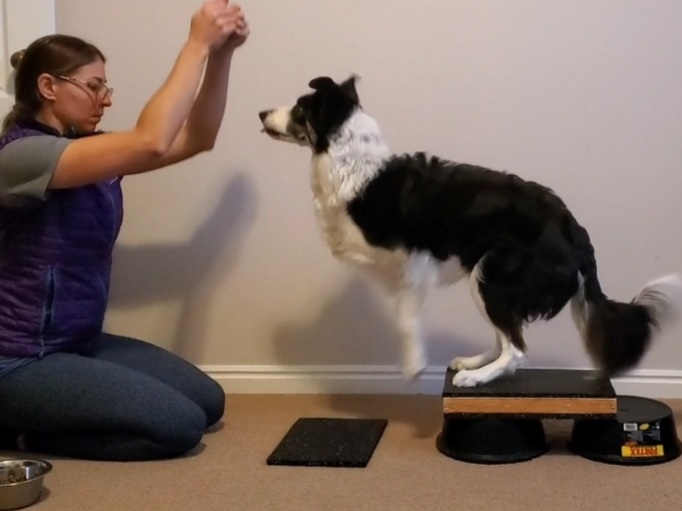 Expert
Manage Cookie Consent
To provide the best experiences, we use technologies like cookies to store and/or access device information. Consenting to these technologies will allow us to process data such as browsing behavior or unique IDs on this site. Not consenting or withdrawing consent, may adversely affect certain features and functions.
Manage options Manage services Manage vendors Read more about these purposes
View preferences
{title} {title} {title}